Visit Rotterdam well-prepared and have the time of your life. Here you will find all information about money matters, medical facilities, police, national holidays, weather,public toilets and more.

Matters of money
In Rotterdam, the euro is the legal tender. Practically anywhere in the town, you can pay at every register with cash, PIN and chip-cards. Do you need cash money? ATMs and banks are always close by, particularly in the city centre. If you need to exchange other currency into euros, you can use e.g. the services of GWK Travelex at Stationsplein (next to Central Station) and at Rotterdam The Hague Airport.

Emergency phone numbers
You certainly hope it will never be necessary, but something might happen during your visit which requires medical attention. Keep the following numbers close at hand:

Hospitals
There are several hospitals in Rotterdam. If you require emergency care, all these hospitals have Accident & Emergency wards.

Police
Rotterdam has various police stations in the city centre, but also in the outlying city districts. Police headquarters is open 7 days a week, 24 hours a day:

Luggage storage
Do you want to discover Rotterdam unencumbered by your luggage and leave it somewhere safe? This is possible at Rotterdam Central Station. Lockers can be rented for maximum 72 hours. It is possible to open it before that time, but that will mean you need to pay the locker rent again. Payment beforehand, with pin or credit card. Prices from € 4,00 per hour (for the first 24 hours), depending on the size of the storage locker. More information

National holidays 2022
The following days are national holidays in the Netherlands. On most of these days, employees who work in the private sector and at government agencies will have a day off. Public institutions often work Sunday shifts on these days. The hospitality sector does generally remain open on national holidays.

ID required in public
In the Netherlands, and therefore also in Rotterdam, the police and regulatory authorities (such as bus and train conductors) are allowed by law to ask for your proof of ID. Care providers are also allowed to check your identity. This is only allowed in certain situations:

In those contexts, you need to be able to show an authentic, valid proof of identity (passport or ID card). If you are unable to do so, you are in violation of the law and run the risk of being taken to the police station or receiving a fine.

Climate and weather
The Netherlands has a temperate, maritime climate, generally involving mild winters and cool summers. The climate is mainly due to the coastal proximity of the Netherlands to the North Sea. In general, the coastal provinces – including Rotterdam – usually have milder autumn and winter months than the inland, eastern provinces. Spring and summer in the west is usually slightly cooler than the east and south of the country. The weather is a favourite topic of conversation in the Netherlands. Not in the least because it can vary greatly, influenced by weather fronts and wind conditions. There is no universal advice or prediction we can give, so check the current weather info and forecast online before and during your trip, for instance with the Buienradar.

When you gotta go, you gotta go. In Rotterdam, there’s no need for panic, there is a toilet facility every 500 metres in the city centre. Besides public toilets and urinals, you can use the toilet at almost 50 catering establishments for free. These cafés, restaurants and hotels can be recognised by this sticker: 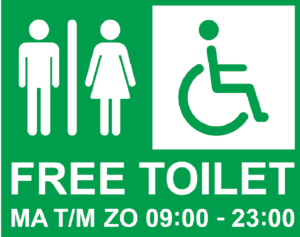 The sticker also indicates whether the toilet is wheelchair accessible. Below you will find a handy map with all the public toilets in Rotterdam. With the HogeNood app, you can immediately find the nearest accessible toilet with your smartphone.

Back to overview
VVV Gift Cards